The port of Barcelona is an infrastructure that, over its history, has only faced the sea and it has served to what came and left here. One symbol of this place is the Statue of Columbus, right at the end of the Ramblas, that points with his index in the direction of the Mediterranean. But, thanks to the expansion of the Port of Barcelona to the logistic zone, a possibility to the Port Vell was opened and it might face the city and be colonized by the citizens. It is the moment to renaturalize this space, to fill it with life, and that the inhabitants from the surrounding neighborhoods, not only visit it but take it and enjoy it.

Do you imagine changing the port into an urban park with a lake in the middle? A park that can be enjoyed by the inhabitants of Ciutat Vella, Poble Sec, the Raval or Barceloneta? A park that connects Montjuic, Ciutadella, and the beaches? A park to take a walk, to run, to practice sports, a park with beaches to swim and islands to practice surf or canoe? A space full of leisure, culture, biodiversity, and relaxation where the water baths the perimeter. Then, welcome to “Parc Blau” by ON-A.

The Statue of Columbus pointing the sea.

The evolution of the Port from 1974 up to now, and public accessibility from Port Vell or Port-Ciutat perimeter. 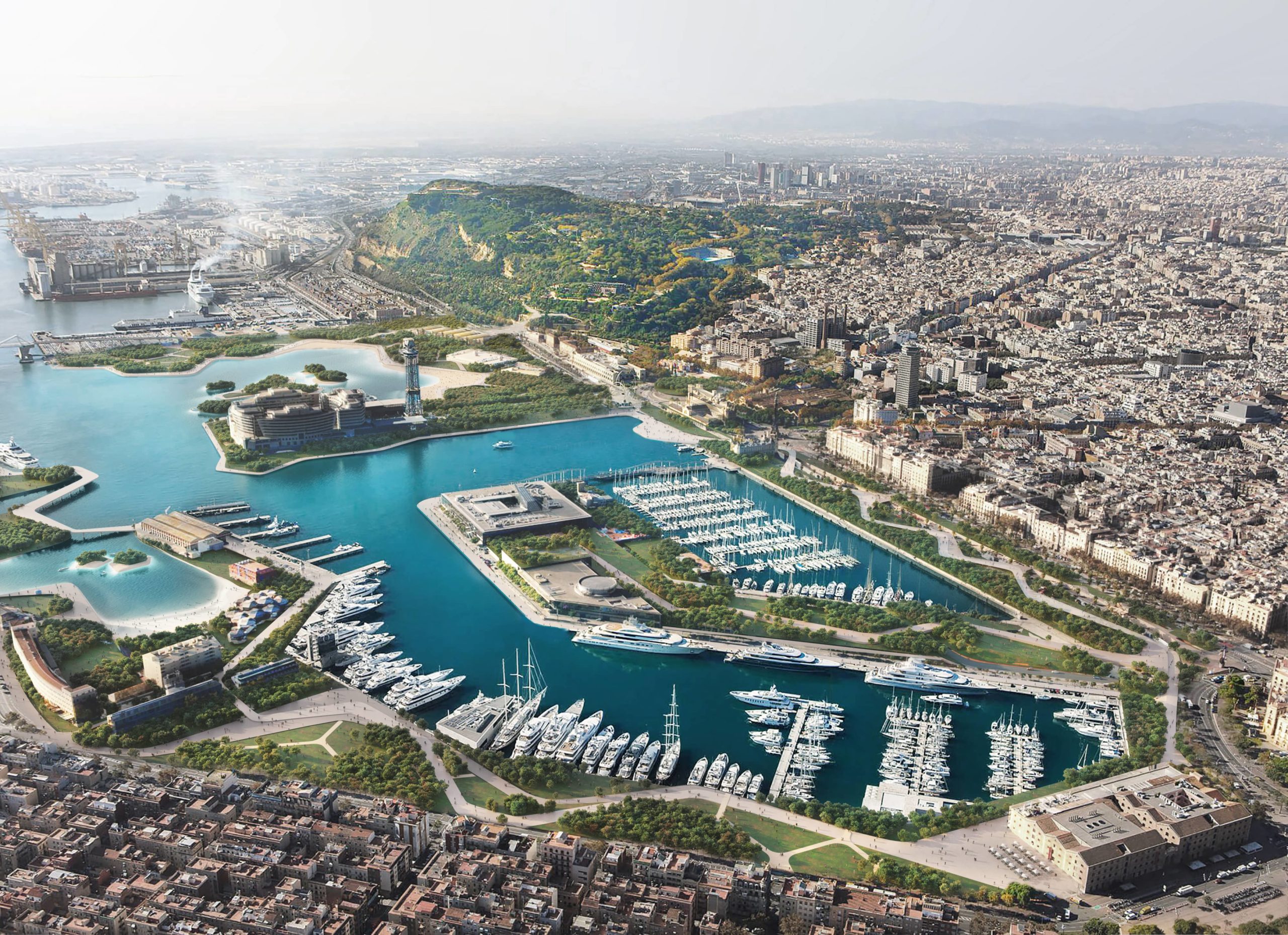 We propose to transform the Statue of Columbus using AR technology in a big tree which is going to be the symbol of accessibility from the Ramblas to this new park (Parc Blau). It is about transforming an iconic monument that is located there to be observed and that only looks at the sea, it commemorates colonization that occurred far ago in a different time and now it is going to symbolize new colonization. The tree Colo-nizer, a symbol of the openness of the port to the city, is an element full of biodiversity that all citizens can enjoy and visit.

Overlap of the Tree Colo-nizer vs the Statue of Columbus. 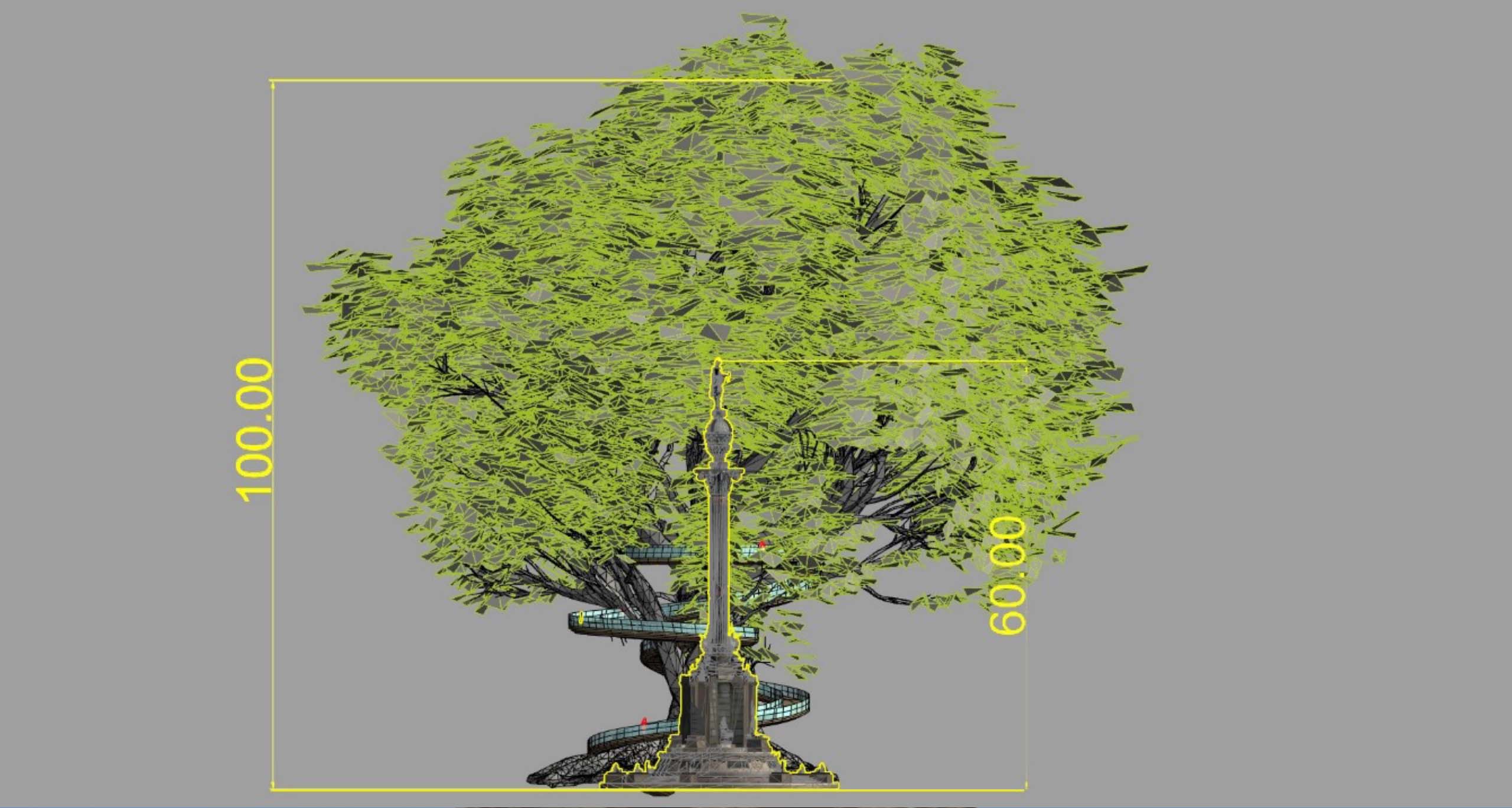 The Tree Colo-nizer represents a big holm oak, it is the tree most representative of Catalonia.

Position of the AR visualization points

We propose 2 points of visualization in the intervention, the first is for the totems of information and, the second, for the QR codes that will give access to the AR visual display. The point will face the Statue of Columbus from the Ramblas and the number two from the port to the Ramblas. 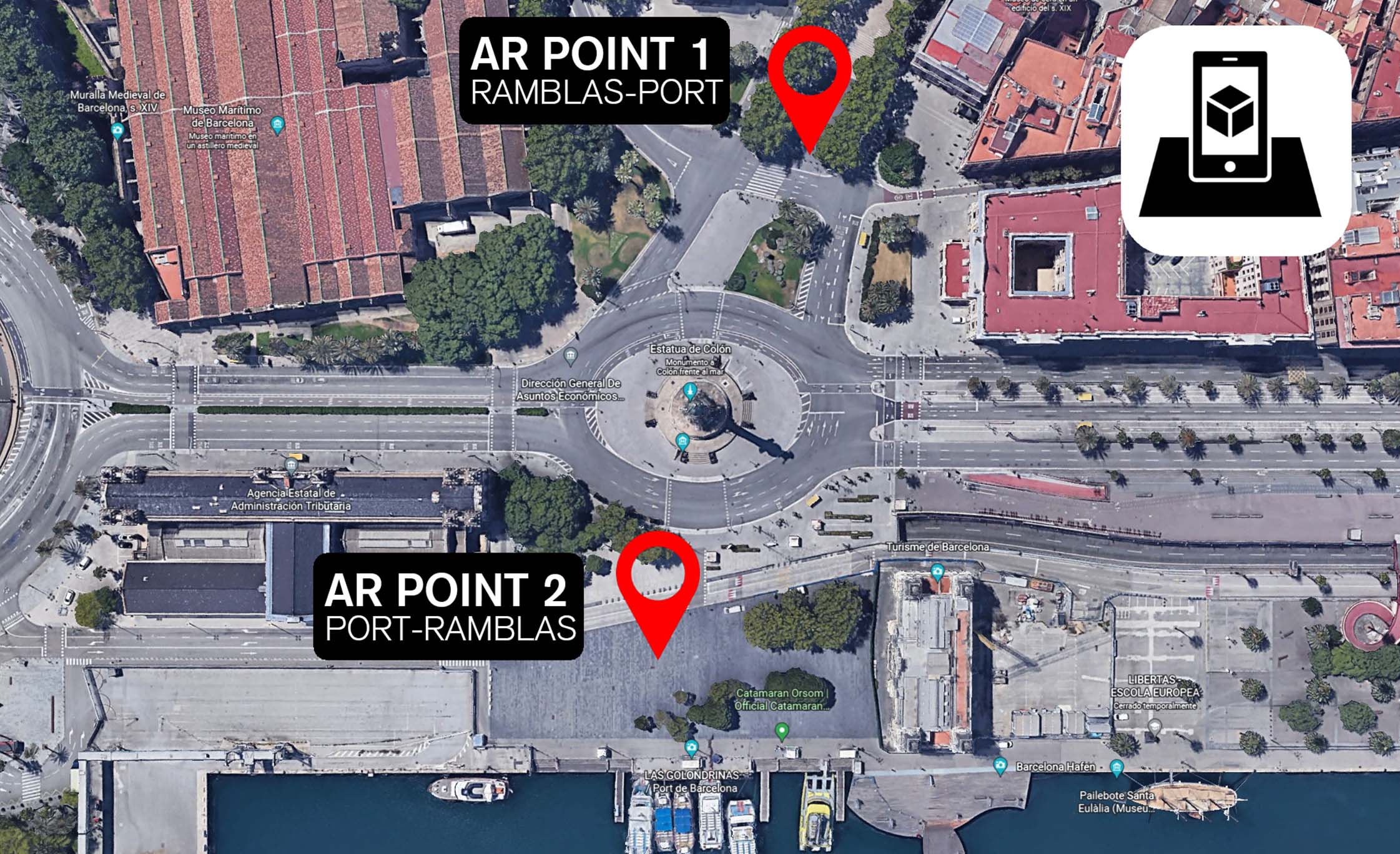 The intention is to show to the participants of the festival the transformation of this space, one side dominated by the Statue of Columbus and the other by the Tree Colo-nizer. It is a big structure with elevated accessible platforms for everyone, its is full of biodiversity and it works as a door and viewpoint of this new park called Parc Blau. 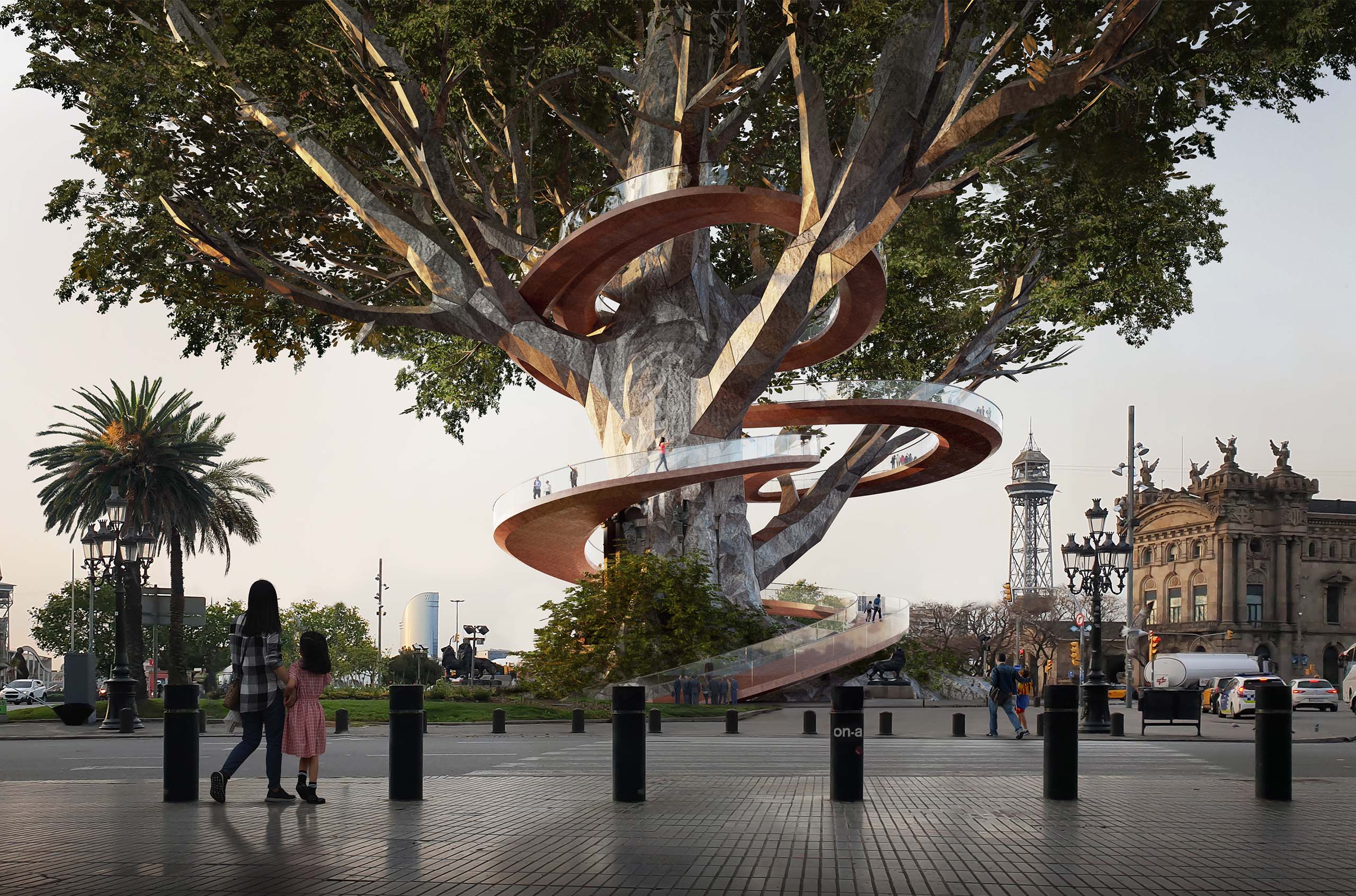 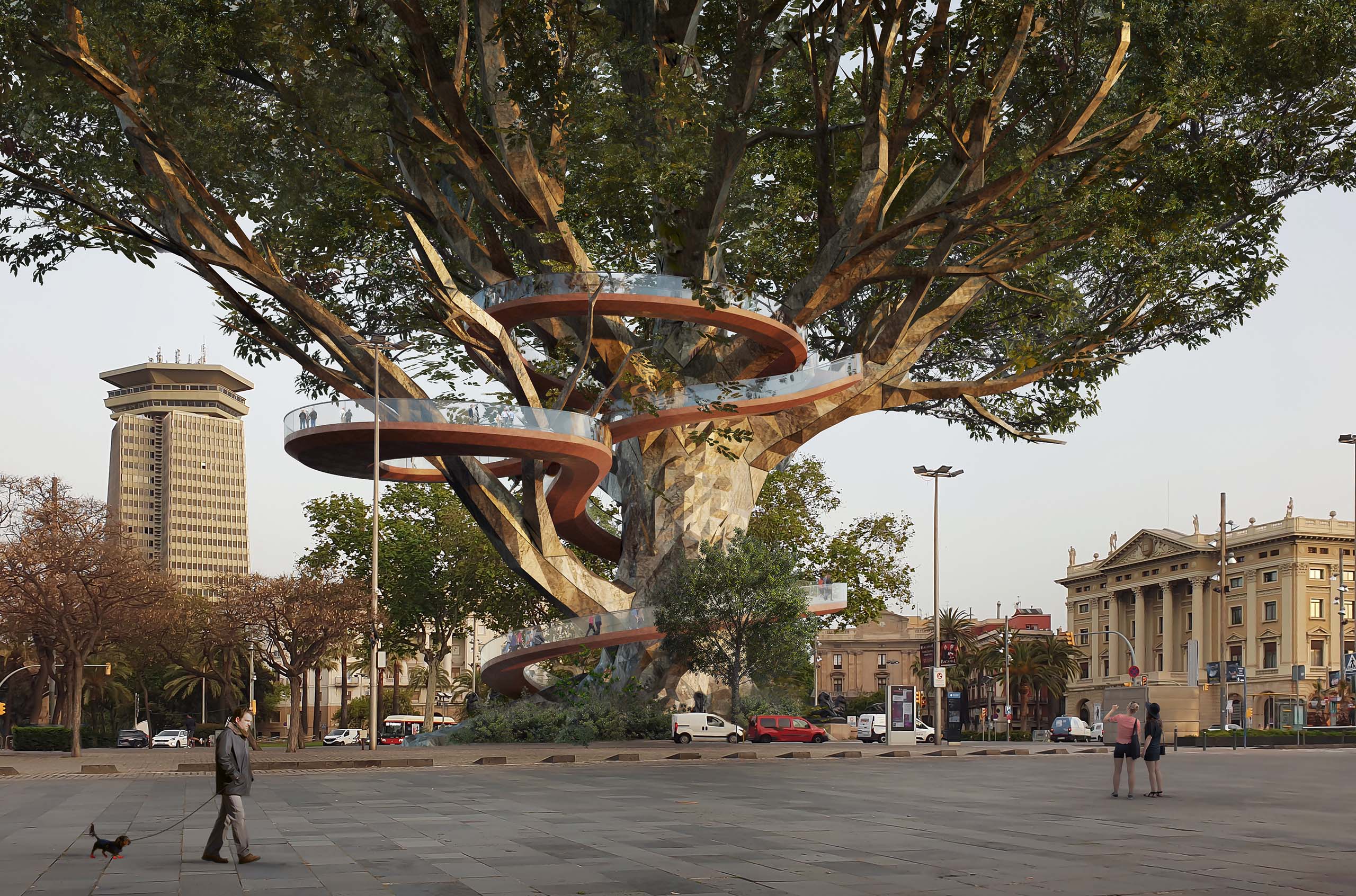